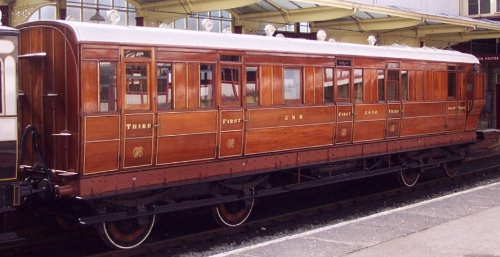 CURRENT STATUS:  Available for restricted filming use on Worth Valley Railway. This carriage cannot be used at other locations.

2856 was built by the Great Northern Railway at Doncaster in 1898 as one of a batch of 36 vehicles of diagram 189 to the design of E F Howlden, Carriage Superintendent. These vehicles, and the others he designed, were distinctive in that the bodyside panelling consisted of two layers, the upper layer above the waistrail being set back slightly from the lower. Teak was of course used for framing, panelling and beading, and this would have received many coats of varnish.

Four compartments are provided, two for each class, but only the First Class passengers had access to the central toilets. A composite steel and timber underframe is carried on two steel bogies with oil axleboxes and Mansell wheels with woodblock (teak) centres within a steel rim. Gas lighting was provided and two large gas storage tanks hang beneath the coach centre.

When the GNR amalgamated with other East Coast Railways to become the London & North Eastern Railway in 1924, 2856 was renumbered 42856 and allocated to the Great Northern area. It was withdrawn from passenger traffic in 1949 and the following year was converted for Departmental use as Riding Van DE 320051 to accompany out-of-gauge loads being carried by rail from the electrical works of Parsons, of Heaton, near Newcastle. During the conversion much of the interior was removed or remodelled, door openings were cut through the compartment partitions, and some of the doors were modified to enable them to open inwards. Longitudinal bench seating was installed, as was a heating stove, kitchenette and electric lighting.

After a number of years carrying out this service the coach eventually found itself no longer required and in 1970 it was sent for scrapping. Frantic efforts were made to rescue it and the Newcastle Coach Group was formed to preserve it. They were successful and 2856 was returned to storage in Heaton Motive Power Depot. Two years later it arrived on the North Yorkshire Moors Railway and there it remained until 1995. Over the intervening years some repairs were carried out to limit the damage being caused by open storage, and a number of appropriate fittings were acquired from redundant coach bodies. However, lack of suitable facilities for restoration meant that little real progress could be made so the Vintage Carriages Trust purchased 2856 and moved it to Ingrow to await the completion of the restoration Workshop, under construction at that time.

In December 1996, only weeks before that building was completed, an arson attack on the coach caused extensive damage to the Brake compartment and smoke damage to the rest of the vehicle. Many spares and restoration items stored inside were also lost. Fortunately the damage did not put the vehicle beyond repair and soon afterwards it was safely inside the Workshop and external restoration commenced in its centenary year.

This restoration was with the help of a Museums & Galleries Commission/Science Museum "PRISM" Fund grant (Fund for the Preservation and Restoration of Industrial & Scientific Material), for which we are exceedingly grateful. This followed insurance work in which just about everything of the fire-damaged Brake compartment above floor level was rebuilt, to a very high standard.

In its long working lifetime our carriage had suffered at least two minor shunting or similar incidents, causing some structural damage to the wooden underframe. Rectifying this was relatively straightforward. Of more consequence was what seems to have been long-term overloading of the Guard's Brake. This had resulted in distortion of the underframe - effectively, everything had dropped around the bogie centre pivot point. Rectifying this was quite a challenge, featuring the services of structural engineers, steel angle clamped around the distorted and weakened members (with minimal intervention to the original material), and with the centre member built up with a carefully-shaped oak filler piece.

Other work below floor level included a major clean of the underframe and its flitch plates, followed by appropriate use of wood preservative on the timber and of paint on the metalwork - here, we used Jenolite as pre-treatment, then Williamson's anti-corrosive green primer followed by two coats of their Underframe Black: probably "over kill", but it looks good and should last many years! The two bogies were similarly cleaned and painted, with work here including professional rebuilding of the leaf springs (by Springline, of Sheffield) and wheelturning, this by Ian Riley at East Lancs Loco Works.

We joined in a LNER Coach Association teak purchase. There was just sufficient of the original teak panelling in good order to repanel above the waistline, with the new teak being used below this. Bob Timmins did his usual excellent job of varnishing. Judicious use of varnish with a subtly different shade means that you just can't tell the difference between the old and the new teak. Bob also attended to the lining and lettering, later returning to hand-paint the "GNR" monogram on to the outside door panels.

Using canvas for the roof was a "first" for us - we've previously used PVC-filled nylon mesh to good effect, but with GNR 2856 likely to spend most of its future life under cover we felt that this time we should use traditional canvas roof covering, albeit avoiding any lead-based materials. Despite taking advice from all directions, bedding the canvas down didn't go too well for us - we will be changing our approach for the "next time"! However, after quite a bit of sorting, and a lot of paint, it now looks good and in our circumstances should last for many years.

We were delighted to receive the prestigious Transport Trust Peter Allen Award for our work towards completing the external restoration of this coach.  This Award was accompanied by a cheque to the value of £1,500, which was of very great assistance towards the coach's restoration.  The Transport Trust's Award scheme is of very real help towards restoration projects across the whole transport spectrum - road, air and water as well as rail - and we are very pleased to have been the recipient of the premier Award within this scheme, the Peter Allen Award.

Following closely on the above, we were very pleased to learn that we had been successful in our application to the Heritage Lottery Fund for a grant towards the restoration of the interior of this carriage.

After several years of restoration work, the carriage was officially launched in public service on Sunday 26th September 2004, carrying the Mayor and Mayoress of Keighley, and a representative of the Heritage Lottery Fund. Around eighty representatives of the carriage and wagon departments of other heritage railways from Ireland, Scotland, Wales and all parts of England also took the opportunity to travel in the carriage during the day, as part of the annual Carriage Restorers Convention.

This carriage was the Overall Winner of the Heritage Railway Association Carriage and Wagon Competition 2004.

Testament of Youth (2014 version); Timeshift:Between The Lines ;  Brideshead Revisited (2007 version);  North and South;  The Forsyte Saga;  Hound of the Baskervilles; Turner - the man who painted Britain;  The Way We Live Now