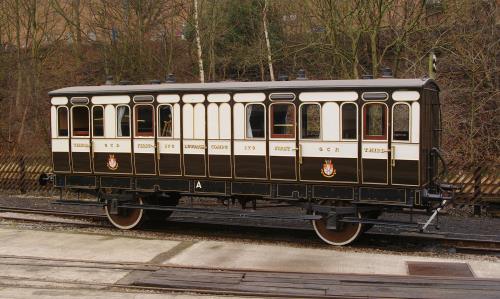 CURRENT STATUS:  Available for filming use

This four-wheeled coach is the flagship of the Vintage Carriages Trust. It was built in Gorton, Manchester, by the Manchester, Sheffield & Lincolnshire Railway (MS&LR). It is a "tri-composite", having compartments for all three Classes - one First Class, one Second Class and two Third Class compartments, with a central luggage compartment. The MS&L grew into and was renamed the Great Central Railway in 1897, as part of its aspirations to reach London. The carriage ended its service days with British Railways as a tool van and was purchased in a dilapidated state. Some conservation was carried out shortly afterwards. but restoration in earnest did not start until 1983, being completed in 1985. It has been restored to early Great Central Railway livery.

The Manchester, Sheffield & Lincolnshire Railway was built as a rather rambling cross-country line from Manchester to the various small communities of Lincolnshire and to New Holland (for the ferry to Hull). It also reached Grimsby and the new seaside town of Cleethorpes.

Despite its age the "pot lamps" suspended in the compartment ceilings are originals, one even bears the Manchester Sheffield & Lincolnshire Railway mark. These oil lamps would have been lit and then dropped into place by the lamp man, walking along the roof of the train as dusk approached.

To see an image in more detail,

In March 1989 HRH The Duchess Of York travelled in this carriage when HRH visited the Museum of Science & Industry, Liverpool Road Station, Manchester

North and South; He Knew He Was Right; Sons and Lovers; Turner - the man who painted Britain; The Way We Live Now; Timewatch;  A History of British Art; The Secret Agent (1995 cinema version);  Tomorrow's World;  The Feast of July; I've Been Here Before; The Private Life of Sherlock Holmes; Resurrection