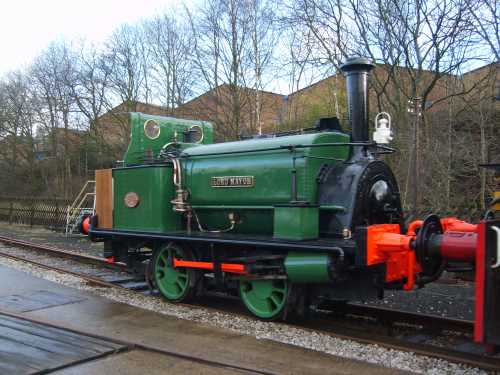 The smallest locomotive based on the Worth Valley Railway: Lord Mayor,
built by Hudswell Clarke and Co, Leeds in 1893.

CURRENT STATUS:  Out of traffic. On static display at Ingrow.

Lord Mayor, number 402, was built by Hudswell Clarke and Company, of Leeds, as a Contractors' locomotive for Edmund Nuttall, Ship Canal, Salford. It worked on construction projects such as large housing estates or railway construction where its function was to carry materials such as stone or bricks around the site. The small size of such locomotives was determined by the need for easy haulage by road, on a low loader towed by a steam traction engine. As most of these locomotives were narrow gauge Lord Mayor is somewhat unusual in being standard gauge.

Lord Mayor was later owned by Messrs Price and Wills and was used in dock construction in South Wales. From 1905 to 1908 (then owned by C W Wills and Company), the locomotive was used in the building of the Birmingham & North Warwickshire Railway. In 1914 it returned to Yorkshire for defence work at Spurn Head, spending the whole of the First World War on the railway there.

In 1934 it was sold to a Leicestershire quarry, the Cliffe Hill Granite Company, and it spent the next fourteen years moving stone from the quarry face to the crushing plant. In 1948 the locomotive was sold to Messrs George Cohen and Company, possibly as part of Cohen's purchase of the scrap machinery after the quarry closed. Cohens used the locomotive to help dismantle the Liverpool Overhead Railway, and then as a shunter in their yard at Stanningley, near Leeds.

The locomotive stayed at Stanningley until 1966 when the Lord Mayor Trust took over the care of the engine and moved it to the Worth Valley Railway.  Lord Mayor was used for a number of publicity stills for the 1970 EMI version of The Railway Children, starring Bernard Cribbins, Dinah Sheridan, William Mervyn, Jenny Agutter, Sally Thomsett and Gary Warren.  A photo of the locomotive and cast members appeared on the sleeve of the Music For Pleasure LP of excerpts from the soundtrack.

The Vintage Carriages Trust purchased the locomotive in 1990.

Lord Mayor visited the National Railway Museum, York in October 2005 as part of the centenary celebrations for The Railway Children.