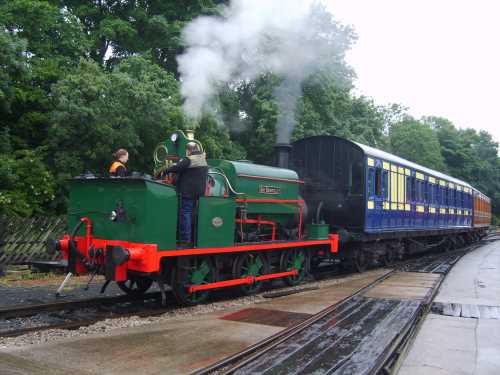 This locomotive, MW 1210, was built by Manning Wardle & Company at their Boyne Engine Works in Leeds. It was supplied new to Logan & Hemingway, a firm of engineering contractors who during the latter half of the 19th century and the first third of the 20th century worked mainly on railway (and allied) constructions. They were steady customers of Manning Wardle, working the engines hard, selling the older locomotives when business waned and re-stocking with new as contracts required.

Number 30, on L & H's books, was put to work building the Manchester, Sheffield & Lincolnshire Railway (later to be the Great Central Railway) and was noted on the excavation of the Nottingham GCR/GNR joint station site (eventually named Nottingham Victoria). A slack period followed completion of the GCR, and thinning out their fleet saw the locomotive renumbered as 10. It is then known to have worked on the Wath Concentration Sidings (1905-07) and the Doncaster Avoiding Line (1908-09) in Yorkshire (both contracts for the GCR), then (still on GCR contracts) in Lincolnshire during 1910-15, first at Frodingham Viaduct in-filling, then at the Keadby Deviation Line construction. No. 10 was next used at the Thoresby Colliery (Nottinghamshire) branch line construction in 1925-26, the Crofton Tunnel Widening at Barnt Green (Worcestershire) for the LMS in 1926-27, then back to Thoresby Colliery in August 1927 for a couple of months before working on the Hattersley Widening between Mottram and Godley Junction (east of Manchester) for the LNER. In 1930 No. 10 went south to the Wiltshire/Somerset border for its last railway contract, the GWR Westbury and Frome Cut-Offs.

In 1935 Logan & Hemingway went into liquidation and MW 1210 was sold to the Cranford Ironstone Company of Kettering (Northamptonshire) where it received the nameplates Sir Berkeley from a scrapped Manning Wardle engine owned by the Midland Ironstone Company at Crosby (near Scunthorpe). To the Cranford workforce however, it was always known as "Paddy Logan".

Sir Berkeley's work at Cranford consisted of hauling four (six with banking assistance) loaded ore wagons from the quarry face to the storage sidings, or from the storage sidings up an incline to the LMS interchange sidings. Between 1943 and 1947 it was loaned to the Pilton Quarry in Rutland where a steep incline down to a dead-end siding at the quarry face exposed the limitations of Manning Wardle's handbrake, even though fitted to act on all wheels in accordance with Logan & Hemingway's standard requirements for all their Manning Wardle engines. During the early 1950s Sir Berkeley underwent a complete renovation, during which the original weatherboard was replaced by an open-backed cab, a Wakefield mechanical lubricator was fitted, a new sheet-steel sandbox was fitted on the right hand side and the original wooden dumb-buffers were removed. The motion was completely dismantled, bearing surfaces were re-metalled, pistons re-ringed and when the whole was re-assembled the valve events were re-timed for optimum efficiency.

At the end of 1957 Cranford Ironstone acquired a Hudswell Clarke 0-6-0ST to replace Sir Berkeley which then became redundant, except for occasional duties as a stand-in for any engine that was undergoing a boiler washout, or some other maintenance operation. Transferred to the associated Byfield Quarries in 1959, it worked for a year alongside MW 1235 (a class K of 1893) but the condition of the latter deteriorated rapidly and it was cannibalised to provide spares for Sir Berkeley. In 1960 Sir Berkeley was yet again made redundant and with its days as a commercially useful engine over it languished in a siding for a couple of years before being formally retired in 1963. MW 1210 was bought in 1964 by Roger Crombleholme, just in time to save it from being scrapped, and was eventually brought to the Worth Valley Railway where its original weatherboard was refitted, having been discovered at Cranford. Restored to service it took part in the BBC Television production of The Railway Children.

After expiry of its boiler certificate the Vintage Carriages Trust bought the engine and firstly kept it as a static exhibit but in the course of time restoration to working order took place. Since then Sir Berkeley has travelled extensively within this country and abroad, having been in use at British Steel Scunthorpe, the East Anglian Railway Museum, the Dutch National Railway Museum and the Middleton Railway at Leeds, which is its present location.

The engine was repainted in early 1998 to a light apple green livery, reminiscent of the Cranford Ironstone Quarry livery (but unkindly referred to as "Kermit Green").

Sir Berkeley's ten-year boiler certification expired in 2001.  A new boiler was built in 2006 by Israel Newton of Bradford, thanks to a grant of £50,000 from the Heritage Lottery Fund and donations from hundreds of individuals.  Sir Berkeley returned to service at the Middleton Railway on Saturday April 14th 2007.

A booklet compiled by Robert Emblin and published by the VCT is: "Sir Berkeley and Friends - An impression of Manning Wardle's six-wheeled saddle tank engines". This gives much more detail of the history of Sir Berkeley, its working life, and other Manning Wardle locomotives. It is available from VCT, price £2.95 plus 70p postage - click here for details.

Filming credits for this locomotive: