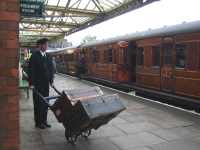 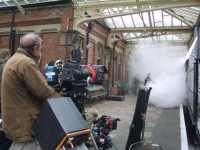 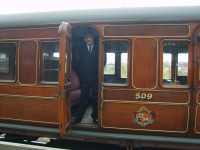 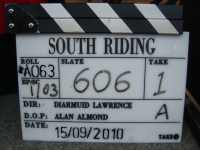 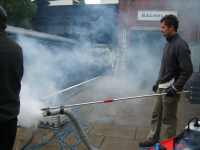 Adapted from the novel (published March 1936) by Winifred Holtby.  Screenplay by Andrew Davies

Set in 1934-35, South Riding tells the story of Sarah Burton (played by Anna Maxwell Martin), who lost her chance of marriage and motherhood when her fiancée was killed in the First World War trenches.  Sarah has become a career woman, and comes home from London to Yorkshire to take up the position of headmistress at a Yorkshire high school for girls.

Before the end of the story Sarah Burton must choose between the career she has fought for and the man who has won her heart.

Robert Carne (played by David Morrissey) is a man whose family have farmed the South Riding for hundreds of years. However, Robert Carne has spent much of the family fortune over the past 20 years, haunted by guilt. Katherine McGolpin plays Midge Carne, the daughter of Robert and his first wife.

Characters in other scenes, not involving Vintage Carriages Trust:

Other railway carriages used in the scenes:     LNER Pigeon Van 4050

Other filming locations:
Street scenes in episode 1 were filmed in Saltaire, West Yorkshire

Scenes were filmed inside the Council Chamber of Keighley Town Hall, West Yorkshire

The Manchester Hotel Ballroom scenes were filmed inside the Connaught Rooms in Bradford, West Yorkshire.  Musical soundtrack for the scenes: