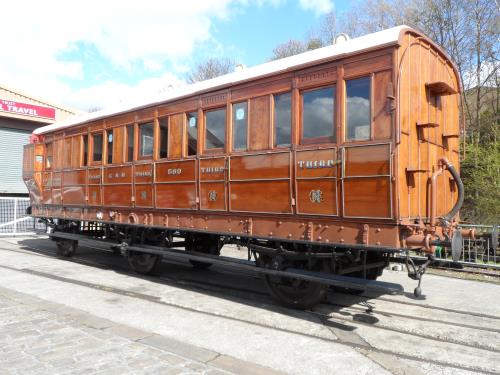 CURRENT STATUS: On display in museum. Available for filming use.

This coach was built in Doncaster by the Great Northern Railway. Its interior would have been quite comfortable, compared with other Third Class carriages of the same period. The four compartments had buttoned, upholstered seats (not yet restored), lit by gas, and the Guard's compartment had "ducketts" by which means he could view down the length of the train.

The London & North Eastern Railway, which absorbed both the GNR and the NER in 1923, kept old carriages like this in service for most of their existence, with this vehicle becoming a Civil Engineer's Department Stores Van at some time before 1942. Having suffered damage to one of the Guard's doors, it was sent to York in 1966 for repair, but was then condemned. Members of the Vintage Carriages Trust then purchased the coach and it was delivered to Keighley on 25 May 1966, having travelled from York to Bradford as part of a parcels train on the previous day.

The Trust has brought it back to its original external condition as far as research presently allows, but what is immediately striking is the varnished teak exterior panelling, for which products of the Doncaster Works were famous.  Further detailed investigation has revealed the original running number, 589. This appears on the back of a number of components - including on the back of the door ventilator cover held by the coach's Caretaker Dave Johnson as shown below: 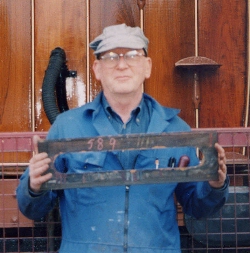 The acquisition of GNR 2856 has provided accurate information regarding the colour of the Guard's Brake compartment roof lining and the size and spacing of the timber slats on the floor of the brake compartment. These have now been modified accordingly. Full restoration (including of the interior) is planned for this carriage, with research and costing now in hand.

Testament of Youth (2014 version); North and South;  He Knew He Was Right; Sons and Lovers; The Way We Live Now; Possession; Timewatch;  The Woman In White; Jude; The Secret Agent (1995 cinema version); Tomorrow's World;  The Feast of July; The Secret Agent  (1992 BBCTV version); I've Been here Before; Trains from the Arc; The Adventures of Sherlock Holmes - The Final Problem  ; A Testament of Youth;  Raffles: The First Step; Country Matters -  The Black Dog ; The Railway Children (1970 EMI version); The Railway Children (1968 BBCTV version).