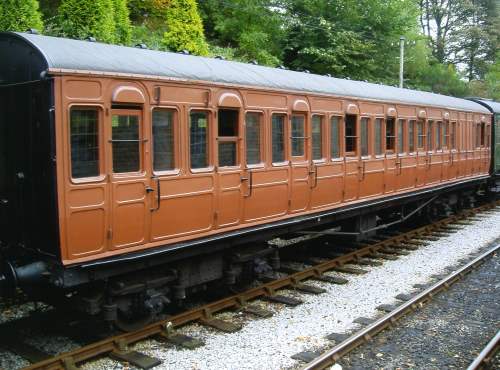 CURRENT STATUS:  Available for filming use.  Currently back at Ingrow.

427 was built by the Metropolitan Carriage, Wagon & Finance Company of Birmingham.

427 was originally built with gas lighting. This batch of carriages was also the first on the Metropolitan Railway to be fitted with a communication cord from new.

This type of carriage survived until electrification reached Amersham in September 1961, allowing replacement of this locomotive-hauled stock by electric multiple-unit trains.   London Transport then stored  six carriages at Upminster, Essex until needed in May 1963 for the Underground Centenary celebrations.

Following painstaking research, this carriage was repainted during 1997 to another, much lighter, shade of London Transport brown known as Leaf Brown (BS381C-489) and the end of the Brake Compartment was painted Rail Red (BS381C-593). The Brake compartment itself is now resplendent in its authentic "Cerulean Blue". Ongoing "compartment by compartment" restoration continues for this carriage.

In March 2008 this carriage was repainted in the Blue and Primrose livery which it carried in 1968 when it was used on the Keighley and Worth Valley Railway's re-opening train.  It was displayed alongside locomotive no. 30072 which was also repainted into its 1968 Worth Valley re-opening livery.

In January 2009 the carriage was repainted into the London Transport dark brown livery.

Testament of Youth (2014 version); Inside Out;  The Forsyte Saga; Hound of the Baskervilles; The League of Gentlemen; The History of the London Underground (archive footage); Commercial for pensions; The Grand; The Unknown Soldier; Fairy Tale: a True Story; Holiday; The Secret Agent (1992 BBCTV version); Sherlock Holmes - the Bruce Partington Plans ; Sherlock Holmes - Wisteria Lodge; Without A Clue; Return of the Antelope; Sherlock Holmes - the Abbey Grange; A Woman of Substance; My Brother Jonathan; How We Used To Live;  Sorrell and Son; BBCTV documentary about 1929 Rugby League Cup Final at Wembley; A Testament of Youth; Yanks; Raffles: The First Step; The Seven Per Cent Solution;