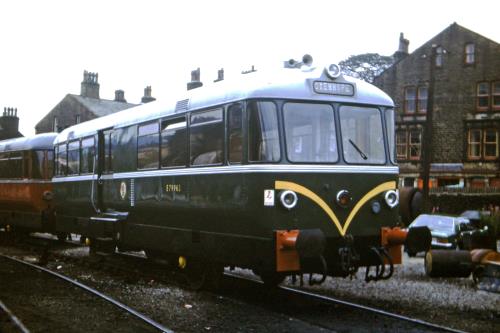 CURRENT STATUS:  Out of traffic. On static display at Ingrow.

The Vintage Carriages Trust concluded negotiations with the Keighley &Worth Valley Railway, in 2014, to purchase one of the line’s two Waggon und Maschinenbau railbuses, No. 79962. The German-built railbus, which has been out of action for over 25 years, is to be restored to its original appearance as far as possible and will also be fully operational.   Following restoration, it is expected to see occasional use at events on the KWVR and will also be available for hire to other railways.

As the vehicle requires dismantling for body repairs, the opportunity is being taken to remove residual asbestos, following which attention will be given to the wheelsets before it is transferred to the VCT workshops for full restoration, which should take approximately 3 to 4 years.

Unlike sister vehicle No. 79964, which received a replacement AEC engine in the 1960s and remains in regular use on the KWVR, No. 79962 is fitted with an original Buessing engine, which proved to be problematic when in BR service.  This engine has already been fully overhauled for further use.

VCT Chairman Trevor England said “We are delighted to have been able to conclude negotiations to acquire 79962 and overhaul it to original condition.  It will provide an interesting comparison with 79964, which has had a number of modifications in both BR and KWVR service and we look forward to the day when both vehicles will be able to operate together.”

In an attempt to reduce costs, particularly in Scotland and the Western Region, the purchase of single-unit railbuses was authorised in September 1956. 22 railbuses were ordered from 5 different manufacturers.  They were delivered in 1958 but were all withdrawn by April 1967.   Several of the lines they had operated on were closed, whilst two-car diesel multiple units were found to be better suited on others.

No. 79962 was one of a batch of five railbuses built in Donauworth, West Germany by Waggon und Maschinenbau.  It was  delivered, via the Zeebrugge – Harwich ferry in May 1958 to Cambridge.  The batch were used between Witham - Braintree, Witham - Maldon, Marks Tey – Bartlow, Bartlow - Audley End and Cambridge - Mildenhall.  In September 1964 the Witham - Maldon and Bartlow - Audley End branches closed and all five became surplus shortly afterwards.